Skip to content Skip to left sidebar Skip to footer

L’Anse Township was established on May 8, 1846, but the rich history of the area began many years before.  On October 15, 1660, French Jesuit Priest, Father Rene Menard, arrived in the area and spent the winter in what is presently known as Pequaming on Keweenaw Bay.  Even though there were fur traders here before, Menard was the first white person on record to arrive.  Father Menard left the area the following spring and traveled along the L’Anse-Lac Vieux Desert Trail never to be heard from again.

A Biography of Father Rene Menard

Map of the Canoe Voyages of Father Rene Menard

174 years later on September 3, 1834, a young Methodist minister named Daniel Meeker Chandler left Sault Ste. Marie and headed west on Lake Superior by canoe.  Twenty days later, he arrived at his destination called “KE-WA-WE-NON” to begin mission work for the Methodist Church on the east side of Keweenaw Bay.  During the summer of 1835, Chandler began cutting timber for a proposed indian village which is known today as the community of Zeba.  Thus began the first mission settlement in the Keweenaw Bay area.  It wasn’t until 1843 that Father Frederic Baraga began a Catholic Mission at Assinins on the west side of Keweenaw Bay.  The present Methodist church in Zeba, known as the Zeba Indian Mission United Methodist Church, was erected in 1888 and is an area landmark. 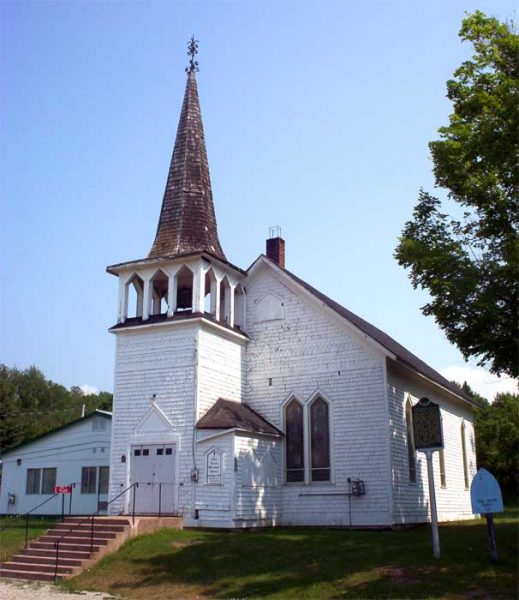 Fur trading was the economic norm in the Keweenaw Bay region during the early 1800’s.  Pierre Crebassa, considered the Town Father of L’Anse, built the American Fur Trading Post at the present day L’Anse Township Park just north of L’Anse.  It was Mr. Crebassa who wrote to and convinced Father Baraga to come to the region and begin a Catholic Mission.  He eventually became the first area postmaster in 1866.

When L’Anse Township was founded on May 8, 1846, the township area was part of Houghton County with Willian A. Pratt as the first township supervisor.  Present day Baraga County was established on February 19, 1875 and was divided into 5 townships which includes, Arvon, Baraga, Covington, Spurr and L’Anse.

The Village of L’Anse came into existance in 1871 because of a new railroad line and terminus that ended at the head of Keweenaw Bay.  There was stagecoach passage and boats ferried people and supplies to the L’Anse area, but it was the railroad that led to the town being formed.  In the early 1870’s, L’Anse was a booming town and had visions of being the trading center of the Upper Peninsula of Michigan.  Businesses were moving in, new buildings were being constructed, an iron ore dock was built and the price of land skyrocketed.  Everyone was talking about this new center surpassing even Marquette and Escanaba, Michigan.  But shortly after it all started, L’Anse fell upon hard times with the panic of 1873.

L’Anse had another setback 23 years later.  On May 9, 1896, a fire started at a sawmill called the L’Anse Lumber Company.  Because of the dry conditions and strong winds that particular day, sparks were blown over to L’Anse and the village was destroyed.  The fire did not burn out the desire of the community to rebuild.  Committees were set up and with the help from others, the village was rebuilt.

1900’s Picture of the Township Hall

L’Anse Township history would not be complete without mentioning the founder of Ford Motor Company, Henry Ford.  Mr. Ford owned vast acreage of land within the township and county.  He also owned 3 sawmills located in Alberta, L’Anse and Pequaming.  As a matter of fact, he owned the towns of Alberta and Pequaming!  Anyway, Mr. Ford was in the lumbering business because he wanted to control all businesses that had an impact on his automobile empire.  The lumber processed at his sawmills were used as the wood panels on his automobiles.  When Mr. Ford bought the town of Pequaming, it included the home of Charles Hebard who was the previous owner of the Pequaming sawmill.  Not long after the purchase, Mr. Ford made a trip to Pequaming to inspect the sawmill and town.  When he saw his new house for the first time, Mr. Ford was quoted as saying, “It’s a nice little bungalow”.  The name stuck and Mr. Ford’s Pequaming house became known as Ford’s Bungalow.

Today, L’Anse Township is the population center of Baraga County.  The Village of L’Anse is the county government seat and business center for most of the surrounding area with fine shopping facilities, churches of many faiths, a modern hospital and a variety of other services.  The L’Anse Township area is also famous for beautiful Lake Superior shoreline, pristine wilderness, waterfalls, lakes and streams.  Baraga County as a whole has some of the finest outdoor activities which include camping, fishing, hunting and snowmobiling.  The uncrowded, pleasant surroundings beckon the visitor from near and far.